Cooperating with God in Faith Refinement

THE SLAG AND THE SLAGGER

When I (Ed) was in my early twenties, I worked in a steel mill in Northwest Indiana. I used to watch train cars full of raw iron ore being delivered to be purified. The raw ore was placed in large vats and heated up to an extreme temperature. As it melted down, the impurities in the iron ore would come to the surface as a dull, crusty slag. The man working the furnace was called the “slagger.” His  job was to manage a large, ladle-like tool and drag off the slag into a holding area to be discarded later while the molten steel continued to heat. As more and more of the impurities surfaced as slag and were removed, the molten steel began to glow a bright golden yellow. After all the slag was removed, the refined, purified steel was poured into molds for later use. 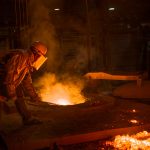 This is a picture of what God is doing. He brings fire into our lives, and the impurities in our faith come to the surface. We can easily identify them by the way we feel in the moment: fear, anxiety, worry, dread, discouragement, panic, helplessness, powerlessness, despair, abandonment, and so forth.  All of these are signs of a lie-based belief and evidence of an impure faith/belief. God wants us to submit to His refining fire and allow Him to pull off the slag so we will glow like molten steel, or better yet, as purified gold.

Read how Peter describes this process where he wrote, “…do not be surprised at the fiery ordeal among you, which comes upon you for your testing, as though some strange thing were happening to you; but to the degree that you share the sufferings of Christ, keep on rejoicing, so that also, at the revelation of His glory, you may rejoice with exultation” (1 Pet. 4:12-13).

Notice how we are to respond in the midst of the fire: he writes,  “… keep on rejoicing, so that, at the revelation of His glory, you may rejoice with exultation.” How are we to rejoice in the midst of such unpleasant life experiences? The answer is found in the analogy of a person purifying gold. He has pulled off the dross or slag to the degree that the surface is glowing with mirror-like splendor. The refiner is looking into the molten gold and because of its purity, he is able to see his reflection in the gold. When the “revelation” (revealing) of His glory is reflected in us, we will rejoice with exultation! So in the midst of the fire, we can choose to rejoice in expectation of what is coming. When His glory is revealed in us, we will rejoice spontaneously, as this is the fruit of the Holy Spirit.

THE FIRE IS NOT OPTIONAL IF YOU BELONG TO GOD

Throughout the ages God has allowed (and even orchestrated) life difficulties for His people which, in turn, exposed their faulty thinking and wayward behavior. In the midst of life crises and suffering, God was ever present and ready to reveal His truth. In these difficult life moments, the lies His people believed were exposed like the dross surfacing in molten gold. Suffering is God’s refining fire that purifies the faith/belief of His people. This refining fire exposes the “dross”—the lies believed—and it is here that He brings about the renewing of their minds.

Whether we realize it or not, we are in God’s refining program. If we belong to Him then this is what He is doing. It is not a question of whether you will go through the fire, for you will. It is only a question of whether you will choose to cooperate with God and benefit from it, or not. To the degree we understand the process and genuinely believe that it is good, we will be able to face each fire with the joy of expectation.

James the Apostle tries to encourage us when he says, “Consider it all joy, my brethren, when you encounter various trials, knowing that the testing of your faith (refinement) produces endurance” (James 1:2-3). It is through the fire that our faith is made pure. Peter supports this principle when he writes, “…so that the proof of your faith, being more precious than gold which is perishable, even though tested by fire, may be found to result in praise and glory and honor at the revelation of Jesus Christ” (1 Pet. 1:7).

To download this video click the down arrow icon found at the bottom right of the video screen.